Then God blessed them and said, “Be fruitful and multiply. Fill the earth and govern it. Reign over the fish in the sea, the birds in the sky, and all the animals that scurry along the ground.”

Over the course of time, there have been countless views opined on what constitutes the human mandate to “govern” the earth.  The older translations refer to this as our responsibility to “subdue” the earth.

There is no doubt that in the order of creation, humanity was given the mandate to steward the world, because, as the Psalmist says, “The earth is the Lord’s, and everything in it” (Psalm 24.1, NLT).  But to what degree can we “govern” or “subdue” the earth, while also being stewards?

The terrible flooding in British Columbia recently has raised this question in my mind.  The area most ravaged by these ‘atmospheric rivers’, around Abbotsford, was once a lake.  Sumas Lake, as it was called, was drained to create a fertile prairie for agriculture.  A process was begun around 1909 and completed in 1924 that created dikes and drainage systems that left the lake bone dry…most of the time.

The human creation of that fertile prairie has come at a cost:  there are records of periodic floods that have caused untold amounts of damage.

Perhaps our understanding of dominion over the earth needs some adjustment.  The earth is our gift from God, to be used for our sustenance and enjoyment.  But it is still his world, and we must take due care to ensure that we honour God in our enjoyment of his creation.Please join me in praying for the people of British Columbia who are affected by these floods.

Along with the somewhat more common spiritual practice called lectio divina, or holy reading, whereby we read a passage of Scripture a few times in order to hear from the Lord, there is also a less common spiritual practice called visio divina, or holy watching.  In this practice, we spend a protracted time gazing upon an image, likewise in order to hear from the Lord.

When we look upon an image, we may see something that prompts a memory, something that might encourage us to have a conversation with God.  The idea is certainly not to use the image as an object of worship, but to allow God to use it to speak into our lives in some way that will build our relationship with him.

Today, I’m encouraging you to spend a few minutes – as long as it takes – looking at this image.  Ask yourself these questions:

What stands out to me the most?

Is there a colour that quickens me in some way?

What emotions am I feeling as I look at this?

Then, pause, and offer your answers to these questions to the Lord.  Perhaps he wants to speak to you.  Even if you get no clear message, spend some time praising him, inspired by the image.

I was asked to preach a message about fear.  As I read Psalm 24, I saw, really, three sorts of fear with biblical remedies.  Have a listen, or click the link below to view the Facebook Live video (with or without an account).

I’m not old enough to have remembered Yogi Berra, who died this week, as a baseball player. I only ever knew him as the speaker of pithy mixed metaphors and non sequiturs. For example, one of my favourites of Yogi’s is, “You can observe a lot by just watching.”

In this era where people are running into poles and people and being hit by cars because their heads are down, staring at their phones, Yogi’s wisdom might be more helpful than ever before. 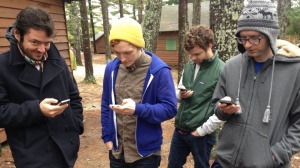 more setting the phone down and looking around. Last Sunday night, for example, as my wife and I sat around the campfire in a nearby provincial park, a whole family of raccoons came sauntering through the edge of our site, presumably on their way somewhere. (The refreshing thing about that encounter is that the raccoons seemed genuinely apologetic for disturbing us, unlike the obtuse, oversized critters that seem to think they own most urban areas. The irony there, of course, is that we were disturbing their territory in the campground!)

What do we miss when we aren’t watching? Do we miss signs from God?

If you’re waiting for a word from the Lord, lift up your head and watch. Yogi said that you can observe a lot by just watching, and he was right.

Take even five minutes today, and look at your surroundings, whatever they might be. Find something in those surroundings for which to give God thanks. Then, make it a daily practice, and expand the length of time you do it. Suddenly, what’s on your phone might not matter so much.

The lease on my vehicle was to come to a conclusion later this year, and as so often happens, the company made an overture to attempt to get me to lease another vehicle from it.  So I began doing the math, and the research, to figure out what I was going to do.

I loved the vehicle, and under other circumstances, might have taken the option to purchase at the end of the lease.  However, I’ve been watching the

price of gas move ever-upward, and decided that smaller would be better.  Even though I like sitting up high, I’d be prepared to sit down low if it meant driving past the gas station instead of to it.  So the company made an offer, and I bit.

I now drive a hybrid.

Why a hybrid? you might ask.  The reason is twofold:  to save money on fuel, and to cut down on emissions (thus lowering my “carbon footprint”, at least a little).

Most people think it’s the responsibility of government, or environmental advocacy groups, to do the whole ‘ecology’ thing.  In reality, though, it’s the church’s job first.  Why?  Because, as the Psalmist put it, “The earth is the Lord’s, and everything in it, the world, and all who live in it” (Psalm 24.1, NIV).

That’s right.  The witness of the Bible calls us to take care of the earth, because God made it, and it belongs to him.  In Genesis, God gave humanity “dominion” over the earth.  It’s ours to take care of on God’s behalf.  That’s why churches should be at the forefront of recycling, composting, using reusable dishes for coffee hours and pot lucks, using public transportation, and being intentional about how we use our motor vehicles.

We may not think that what we contribute to the dirtying of the air or the heightening of a landfill site amounts to much, but when you put together the contributions of all Christ-followers, if we heed the Psalmist’s implied call to action, we can make a real difference in this world for its preservation.

We don’t just preserve the earth for the sake of the next generation, as important as that is (until Jesus returns!).  More importantly, we take care of the world because it is the creation of the God we worship.  What more reason do we need than that?

Think about that, the next time you buy or lease a vehicle, or idle at a drive-thru to get a cup of coffee in a throwaway container!  Whatever choices we make in our desire to take care of God’s world, let’s be intentional about our decisions.