Now, some may misread this and assume that we are putting our faith in a book instead of in the Lord.  Of course, we place our trust in Jesus – but how do we learn about Jesus, how do we know anything about God, except through his Word?

Many skeptics think that you have to check your brain at the door to be a Christian.  I think it’s quite the opposite: we really need to engage our brains as followers of Jesus.  But don’t let pride get in the way of believing what the Bible tells us.

“For the word of God is alive and powerful. It is sharper than the sharpest two-edged sword, cutting between soul and spirit, between joint and marrow. It exposes our innermost thoughts and desires” (Hebrews 4.12, NLT).

Today, we began a new series on 2 Timothy, and today we looked at chapter 1.  The apostle Paul was in prison for his faith, but he was not ashamed!  Neither should we be ashamed of our faith.  Have a listen:

I’ve been a recreational curler for about 16 years. While I don’t think I’d be God’s gift to any team going to the Brier, I think my skills have improved a bit over the years. It took me a long time to be able to deliver a stone in a satisfactory (to me) manner, but most of the time, I find I can now hit my groove and probably get a better “do what the skip asks for” average than many million-dollar baseball players can do in their game. I’d call myself a pretty confident, though humble, curler. What’s more, I hadn’t fallen on the ice in a long time.

The coin had been tossed and our team got choice of colour (translation: we lost the toss). The lead went to throw his first stone, and I followed it diligently 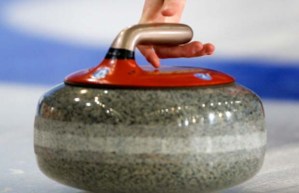 down the sheet. All of a sudden, about eight feet from the far hog line, I found myself flat out on the ice. It took less than a second for gravity to do its number on my whole body.

Thankfully, I didn’t hit my head, and I got up right away. But the first thing I noticed was that my left knee didn’t feel exactly right. I continued sweeping, and thought everything was okay. Then, when it was my turn to throw, I crouched down in the hack, and my left knee rather forcefully intimated that this was not a good idea.

I tried to ignore it. I kicked out of the hack and found myself leaning on the rock. (You’re not supposed to lean on the rock, especially when your gravitational pull is as, ahem, significant as mine.) Writhing in pain, I tossed the rock out of my hand and stood up as quickly as I could. I felt fine. I tried again with my second stone. Same result.

Last Tuesday, I learned how to be a “stick curler” – I used my brush to throw the stone so I didn’t have to crouch down. Who knew there was a learning curve to ice-bound shuffleboard?! While my injury may not have been the only contributing factor, we lost the game…the first game I’ve lost all season.

Oddly, I had just said to my wife, before I left for the rink, that I had not been on a team that lost a game yet this year. Some people would say that was “karma” at work, that I shouldn’t have “jinxed” my game by making such a comment. But I didn’t say it with great hubris – at least, I don’t think I did; it was just a remark on the stats. I’d like to think this was mere coincidence; I certainly don’t believe that God caused my collision with the ice, nor the resulting injury! Nevertheless, as I picked myself up off the ice and realized my (minor) injury, I found myself quoting Proverbs 16.18: “Pride goes before destruction, and haughtiness before a fall” (NLT).

(In case you’re wondering, my physician poked and yanked around my knee and said it was just a strain, and I shouldn’t have to become a chronic stick curler for a few more years yet!)

Be careful out there!

Yesterday afternoon, commuter traffic was snarled in the area around Burlington and Hamilton, Ontario, due to an accident. While this is nothing new, the 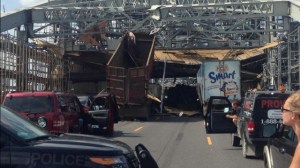 kind of accident was a bit unusual. A tractor-trailer operator, with a long dump trailer, had failed to lower his dump hoist while travelling on the Burlington Skyway, which bridges Burlington and Hamilton across Burlington Bay. And because it was in the Toronto-bound lanes, there was superstructure overhead, and the raised dump hoist meant that the truck crashed into the bridge’s superstructure, causing damage to the trailer and to the structural integrity of the bridge.

As it turns out, the operator has been charged with impaired driving. I suppose that’s not too surprising; ordinarily, those who drive dump trucks are extremely careful to lower their dumping mechanisms, since they can get caught not only on bridge superstructures, but also hydro wires and the like.

I liken an inappropriately-raised dump hoist to human pride. If we let our pride stand out, it can cause us trouble. Like that dump truck accident, it can also cause others trouble, too. Because of that accident yesterday, hours were added to people’s commutes.

On this first day of a new month, take a few moments to do a gut check on your pride. Ask yourself: Have I given my pride over to God? Am I living in humility as God calls me to do? The traffic of your life will flow along more smoothly when pride is lowered to clear any overhead barriers.

“Pride goes before destruction, and haughtiness before a fall” (Proverbs 16.18, NLT).