Last week, I wrote about the constant noise that surrounds a trip to Las Vegas.  This week, I thought I’d share a bit about what happened when we were outside Las Vegas – a very different experience!

Thanks to the genius of Sir Sanford Fleming and his time zones, we knew that we’d wake up on our first morning in Vegas on Eastern Time, so we thought we’d take advantage of that fact by renting a car when we left the airport, and driving outside the city to see two incredible sights:  the Hoover Dam and the Grand Canyon. 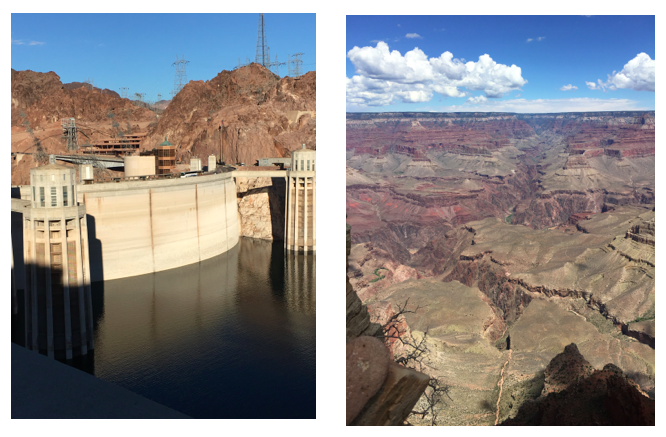 It’s an ambitious drive all in one day, but we did it, and boy, was it worthwhile.  Being up by 5:00 a.m. local time on the day after our arrival, we were able to be up and out of the hotel to be at the Hoover Dam before 7, when almost no one was there.  We took our time, poked around, and saw this feat of human engineering in all its imposing glory.  The concrete is so thick on that dam, it’s still curing, more than 80 years later!

As remarkable as feats of human engineering can be, though, a few hours’ drive later, we were met face-to-face with an even greater feat, one of divine engineering.  The Grand Canyon must be seen in real life, for photography does it little justice.  It’s a mighty deep hole, and it goes on forever!  While we didn’t stay too long, or see the Canyon in its vastness, we both felt like we needed simply to stand there and take it in.

Of course, there have been countless years of weather and erosion and who-knows-what sort of geological activities that have made it what it is today, but the Grand Canyon is sort of the anti-mountain: instead of going up, it goes down – way down! – but it inspires an almost equal awe in me.  I can’t look at a phenomenon like the Grand Canyon and not believe in a benevolent Creator.  It’s part of “general revelation”, the sights of the world that draw one to understand the existence of God.

Mountains capture my heart, geologically speaking, but the Grand Canyon came a close second (well, maybe third, after walking the dusty paths of Galilee when on pilgrimage to the Holy Land).  I know that there are people who will say that this stuff just happened, but I think that takes as much faith as it takes to say that God made it.  And I’d rather side with him, given the choice.

It was a stark contrast to the bells and lights and concrete of the Las Vegas strip, and a welcome one.  And it made me ask myself, Do I make a habit of noticing God’s hand at work in creation?

How about you?  Do you make a habit of noticing God’s hand at work in creation?  Mountains, valleys, and flat places are all gifts from the Lord.  Rejoice in them.

“The heavens proclaim the glory of God.  The skies display his craftsmanship” (Psalm 19.1, NLT).