Yesterday morning, I was listening to a favourite piece of music.  It was J.S. Bach’s Prelude and Fugue in C Major, BWV 547, what I know as the 9/8 prelude and fugue, even though the fugue is in cut time.  (Okay, you baroque nerds, I know you’re out there 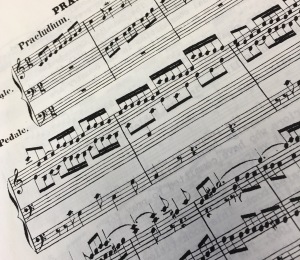 :  calm down.)  There are several things that strike me about the piece, one of which is the conclusion of the fugue, which has a very long pedal point in it, extending the better part of the last 7 measures.

For those of you who are not baroque nerds (I’m guessing that’s the majority…), let me describe a pedal point from a layman’s/amateur organist’s perspective.  It’s a long note carried in the bass (lowest) line of the music, creating some tension while the higher parts do their ‘thing’, but you just know it’s going to be resolved before too awfully long.  Organists like pedal points, because it gives their feet a brief rest on one note!  Maybe Bach wrote so many pedal points because, as an organist, he knew his feet needed a break.

When I think of a pedal point, I think of something deeply foundational.  In music, any number of weird things can happen, but people’s ears will always assume the bass line is right.  So even though bass musicians (whether on a bass guitar, an upright bass, pedals on an organ, or even a bass singer) don’t usually have the melody, their part is foundational to the whole piece.

In the life of faith, foundations always matter, but at this time of year, foundational things are highlighted.  One of the experiences I remember very clearly from my trip to the Holy Land three years ago was a visit to the Church of the Nativity in Bethlehem.  Walking through the old church, filled with scaffolding and Greek Orthodox lighting and candles, we moved to a place under the chancel, to a cavern where a spot is marked, believed to be the very place where Jesus was born.  What was there?  Bedrock.  Foundational stuff.

Amid the bells and whistles and shiny things of the season, remember the foundational matters – the bass line, the bedrock – of our faith:  “When he appeared in human form, he humbled himself in obedience to God and died a criminals death on a cross….  [A]t the name of Jesus every knee should bow, in heaven and on earth and under the earth, and every tongue declare that Jesus Christ is Lord, to the glory of God the Father” (Philippians 2.7b-8, 10-11, NLT).