When my wife listened to this message, she said, “I’d never thought of that passage in that way before.”  Maybe you’ll have a similar reaction, or maybe not!  The parable of the sheep and the goats is often used as a cattle prod to encourage people to good deeds – but to what end?  And whom are we serving in the process?  Perhaps the exposition of Matthew 25.31-46 will be a surprise for you, too.  You can listen to the message here:

If you’re interested, here is a recording of the choral piece I cite in the message.

A friend on social media recently asked an interesting question:  Is Christianity more about religion or relationship?  Or a bit of both?

How would you answer?

There have been congregations, even whole denominations, that have been built on the concept of selling Christianity as relationship and not religion.  I think that may have been a bit of a reaction to the over-religionization (I think that might be a new word!) of the Christian faith.

I have always seen the Christian faith as being primarily about relationship, but expressed primarily in religious ways.

Think about it:  the focus of Jesus’ ministry was the Kingdom of God, which is built by and ushered in by Jesus, through his Spirit. What we do with Jesus, and how we relate to Jesus, is key to the expression of Christian faith.  (After all, it is “Christ”-ian!)

But how we express our relationship with God has a religious element to it.  From the time of the earliest church, modelled after the Jews in the synagogue, Christians gathered together to worship the Lord God, made known in Jesus Christ his Son.  How that gets expressed varies quite a lot among the different traditions of the Christian faith, but there is a religious element that can’t be ignored.

Many people say they can worship God and be Christian without going to church, without being religious.  Maybe they think they can, but I’m not sure anyone has tried and succeeded.  Perhaps those who try simply have a different sort of religious expression.  And, of course, there’s the whole aspect of community that gets lost when the individualistic “I” says, “I don’t have to be religious.”

(There’s also those who claim to be spiritual but not religious; again, I suspect they are just as religious, but it may be expressed differently, or aimed in a different direction.  But I digress.)

Even religious expression involves serving others.  So, how are you living out your relationship with Jesus?

We sometimes misread passages of Scripture, don’t we?  I approached Matthew 10.37-42 expecting a different conclusion than the Lord gave me in it.  This message, surprisingly to me, came out as a call to discipleship and a call to take care of the family of faith.

February is a challenging month for many people who live in the northern hemisphere.  It may be the month for celebrating love and family, and it may be the shortest month, but it often is the dullest month of the year, too – the month that brings to life the C.S. Lewis quotation:  “Always winter, never Christmas.”

I want to encourage you to consider this text by the English poet Christina Rossetti.  Victorian and pre-Victorian English hymnists loved to make references to the weather; one might think they assumed that December weather was the same in England as it was in Palestine!  Often, this text is sung only at Christmas, since it appears in the Christmas section of most hymnals (and its text is filled with the nativity).  It definitely fits the Christmas theme, but perhaps in February, which is the really bleak mid-winter, we do well to revisit this classic text:

In the bleak mid-winter, frosty wind made moan,

earth stood hard as iron, water like a stone;

in the bleak mid-winter, long ago.

Our God, heaven cannot hold him, nor earth sustain;

heaven and earth shall flee away when he comes to reign.

In the bleak mid-winter a stable place sufficed

Angels and archangels may have gathered there,

cherubim and seraphim thronged the air;

but his mother only, in her maiden bliss,

worshiped the beloved with a kiss.

What can I give him, poor as I am?

If I were a shepherd, I would bring a lamb;

if I were a Wise Man, I would do my part;

yet what I can I give him: give my heart.

Here’s a link to listen to this text, with a more delightful English choral tune than is often found in most hymn books.

“As long as the earth remains, there will be planting and harvest, cold and heat, summer and winter, day and night” (Genesis 8.22, NLT). 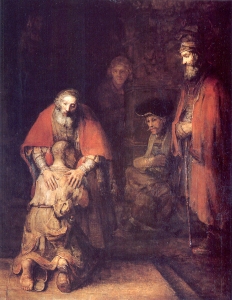 work toward the cross and through the season of Lent.  I revisit a theme I spoke on not long after my arrival at St. Paul’s, asking, “What’s at stake?” – using a real wooden stake.

Yesterday morning, on my way to the church office, I spotted something in the sky. It was 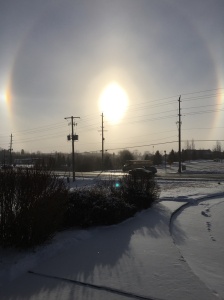 hard to miss, frankly. An ‘ice halo’, otherwise known as a ‘sun dog’, was plainly evident in the southeastern sky. It was a bright, cold, clear day in Nobleton, save for some cirrus clouds in the upper atmosphere. The conditions were right for this unusual meteorological phenomenon. And the timing to catch it was perfect.

Why am I talking about the weather? Well, there’s so many ways we could go with this, but let me limit my thoughts to two.

First, while it was the coldest morning we’ve experienced this winter, and not everybody is a fan of the cold, one isn’t going to see a halo around the sun when it’s warm. Rainbows, yes, but halos, no. Sometimes, we need to experience some discomfort in order to experience a unique blessing.

Have you ever found yourself enduring difficult circumstances, only to discover, later, that those difficult circumstances paved the way to something amazing? Those of you who have given birth will understand this better than the rest of us, I expect. But we who have never birthed a child can understand it, too. Sometimes, we find ourselves in challenging situations. In their midst, we might feel like the world is crashing down around us. But once we pass through those situations, we might find our character has been strengthened, or our hearts have been opened to some greater thing God had planned for us. This may not be true in every difficult circumstance, but something good can come from it, though we may not enjoy it at the time.

Second, timing matters. Often, I don’t head out the door until closer to 9:00, since I live quite close to the church. But yesterday, I was at the church at 8:40. Why? The only reason I can guess is that the Lord wanted me to see that beautiful meteorological feat of his. (Sure, physics can explain it, but who made the physics possible, right?!) When we are open to God’s timing, and ready to go when God says ‘go’ – even if it’s just a 750 metre trip – we can experience blessings that we might miss if we remain chained to our own schedule.

All this might seem like a stretch just from seeing a sun dog, but that was my Thursday morning experience, and it was a blessing for me. How has an uncomfortable situation, or being in the right place at the right time, been a blessing for you?

“When you go through deep waters,

I will be with you.

When you go through rivers of difficulty,

you will not drown.

When you walk through the fire of oppression,

you will not be burned up;

The concept of union with Christ, more commonly discussed among mystics than among everyday followers of Jesus, really is the ultimate goal of the Christian life.  How do we experience union with Christ in prayer?  This message, based on Matthew 17.1-8 and John 15.1-8, explores that question.  Have a listen!

The trial for the two men accused of killing Tim Bosma, an Ancaster man who was murdered when he took two individuals out to test drive a truck he was selling, began this week. I thought it would be appropriate to reprise my Encouragement message from the time of his death, almost three years ago. Time has passed, but the lesson for us – one of many, I’m sure – remains.

By all accounts, Mr. Bosma was not a typical murder victim.  He was a man of Christian faith, active in his church community, and not involved with the ‘wrong people’.  Why was he killed

The answers will, hopefully, come out in court.  What I found especially interesting about the situation as it developed, though, was the role played by the Mr. Bosma’s faith community.  After it was announced that his body had been found, and Mrs. Bosma spoke to the media, who was standing behind her?

Her family, yes – as one would hope and expect.  And her pastor.

That spoke volumes to me.

It didn’t have to be her pastor; it could have been her small group leader or a close Christian friend.  Either way, her faith community was part of her support network.  They were “there” for her in her time of trial.

Most of us, when we go through a crisis in life, don’t have it displayed before the world via the press.  Mrs. Bosma had little choice but to ‘go public’ with her grief; thanks to the mainstream media, and social media (which put up a remarkable campaign to help find her husband), her difficulties were widely known.  Most people observe their grief, their pain, their problems, without such obvious support.

This is especially poignant for followers of Jesus.  Why, when we have a whole community of love surrounding us, do we keep our troubles to ourselves?  Too often, I fear, there is a tacit culture that says, “Be happy” in the life of the church.  Or, there may be a culture that says, “We don’t know what to do when you grieve, so please keep it to yourself.”  And that’s just wrong.

The church, literally, is ‘those called out’ from the world, to love and serve Jesus Christ and his Kingdom – and to love and serve his people.  We are not isolated individuals; we are a community.  God calls us to look after each other, even when we don’t know what to do or say.  When Mrs. Bosma spoke to the media, her pastor stood behind her.  He didn’t say anything, and didn’t have to say anything.  We have no idea what he might have said to her privately, nor is it our business to know; but his mere presence spoke to the significance of a community of faith that wanted to rally behind one of its own that was grieving.

When you are going through a difficult time, do you feel safe enough to share it with your church leaders?  With your small group?   With the friends with whom you sip coffee after worship?  Of course, we do well also to ask if your church community creates a culture of safety for you to share your trials.  In an era of unprecedented connectedness via the Internet, we remain, largely, a disconnected society.  People long for a place of safety, with real people who might not have all the answers but who serve a God who is big enough to know the answers and personal enough to care.  Those real people are called the church.

How is your church doing in that regard?  Is it a safe place to share?

And are you willing to share your burdens?  Give it a try.  Hopefully, you will experience the grace of our Lord Jesus Christ, the love of the Father, and the fellowship of the Spirit.

“Share each other’s burdens, and in this way obey the law of Christ” (Galatians 6.2, NLT).