I figured that, as I approach 7 years in St. Paul’s Church, Nobleton, it’s time we had “the talk”.  I have said very little about sex-related matters in the past seven years, and with society becoming less and less shy about sharing its views, I’m taking the next four weeks to help us discern what the Scriptures have to say about sex issues.

Today, we start by thinking of sex as a gift from God – something some people are surprised to hear from the church.  Based on Genesis 2.4-3.7, you can listen to the message here:

I’m not old enough to have remembered Yogi Berra, who died this week, as a baseball player. I only ever knew him as the speaker of pithy mixed metaphors and non sequiturs. For example, one of my favourites of Yogi’s is, “You can observe a lot by just watching.”

In this era where people are running into poles and people and being hit by cars because their heads are down, staring at their phones, Yogi’s wisdom might be more helpful than ever before.

more setting the phone down and looking around. Last Sunday night, for example, as my wife and I sat around the campfire in a nearby provincial park, a whole family of raccoons came sauntering through the edge of our site, presumably on their way somewhere. (The refreshing thing about that encounter is that the raccoons seemed genuinely apologetic for disturbing us, unlike the obtuse, oversized critters that seem to think they own most urban areas. The irony there, of course, is that we were disturbing their territory in the campground!)

What do we miss when we aren’t watching? Do we miss signs from God?

If you’re waiting for a word from the Lord, lift up your head and watch. Yogi said that you can observe a lot by just watching, and he was right.

Take even five minutes today, and look at your surroundings, whatever they might be. Find something in those surroundings for which to give God thanks. Then, make it a daily practice, and expand the length of time you do it. Suddenly, what’s on your phone might not matter so much.

The Amber Alert has been around for quite a long time now, but it has become better known and more effective since social media has become so ubiquitous. Now, not only do we seek Amber Alerts scrolling across our television screens, we see them on changeable highway signs, and all over Facebook and Twitter.

An Amber Alert issued this week for a little girl from Alberta, sadly, ended tragically, with the little girl having been found dead. More often than not, though, Amber Alerts work quite effectively.

Every time I see an Amber Alert, I am reminded that God has one of these out for every human being who is not in relationship with him.

Did you ever think about it that way?

When we are far from God, God puts out an Amber Alert for us, seeking to have us returned to his care safely and quickly. Trouble is, not everyone responds to this right away. Some never respond at all.

But faithful followers of Jesus can play an important role in seeing people respond to the Amber Alert that has been set out by God for them. Our own witness, our own testimony of God’s goodness toward us, can draw people back to their Creator, back to the One who gave us all life.

How will you help a friend who is far from God respond to the Amber Alert he has put out for your friend? Every kind word, every God-given moment, can afford you the opportunity to help lead someone Safely Home.

Jesus told a story about a young man who wandered away from home. “When he finally came to his senses, he said to himself, ‘At home even the hired servants have food enough to spare, and here I am dying of hunger! I will go home to my father and say, “Father, I have sinned against both heaven and you, and I am no longer worthy of being called your son. Please take me on as a hired servant.”’

“So he returned home to his father. And while he was still a long way off, his father saw him coming. Filled with love and compassion, he ran to his son, embraced him, and kissed him. His son said to him, ‘Father, I have sinned against both heaven and you, and I am no longer worthy of being called your son.’

“But his father said to the servants, ‘Quick! Bring the finest robe in the house and put it on him. Get a ring for his finger and sandals for his feet. And kill the calf we have been fattening. We must celebrate with a feast, for this son of mine was dead and has now returned to life. He was lost, but now he is found’” (Luke 15.17-24, NLT).

That’s the Father who puts out an Amber Alert for us all.

Sometimes, the Family Circus ghosts show up in church, don’t they?  This week, we learned about the importance of all of

God’s people participating in the stewardship of resources.  We can’t say “Not me!”

Stewardship is tough to preach, and sometimes, tough to hear.  But I was encouraged by those who heard a word from the Lord through it.

Near the end of the message, we saw this video.

I imagine you remember what you were doing when you heard the news 14 years ago today, don’t you? I know I do.

I was sitting in an automotive repair shop waiting room, getting an issue dealt with on my vehicle. There was a television on. Whatever was on before broke for a news flash: airplanes were crashing into the World Trade Center in New York City.

That senseless act of terrorism changed the world forever – and probably not for the better.   In a matter of moments, the world 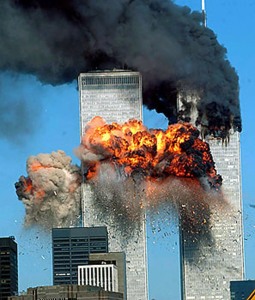 was no longer the safe place it had been – or, at least, it had been perceived to be. When the ‘all clear’ was sounded and airports and borders reopened, it suddenly became mandatory to take your shoes off before clearing security.

For some, 9/11 became a watershed for inconvenience. For others, it became a rallying cry for change. While westerners watched in horror as the video was played over and over again on the news, Palestinian children rallied in the streets to cheer. In the Middle East, many perceived that the Americans were getting what they deserved.

Why were there such disparate views on one tragic situation?

Some in the Middle East saw the United States as a collective bully. Others saw the US as their saviour. Americans saw the nonsensical loss of life and vowed to gain revenge. Whether that revenge was justly exacted remains a point of disagreement with many.

What we can all agree on is that we live in a different world because of 9/11. “The war on terror” became a new phrase, symbolic in different ways for different people. In a way that not even the Cold War could, this new era has caused us to live on the edge of our seats.

So what is a Christ-follower to do , all these years later?

Pray for peace. Work for peace. Don’t be afraid of those who may think, act, or dress differently than we do – but don’t be afraid to disagree with them, either. Reclaim the old definition of tolerance: make allowance for other people to be wrong. But don’t hate them, or fear them, for it. Learn from others, and pray for them. For when we all rally around the Prince of Peace, there will be peace.

“Always be humble and gentle. Be patient with each other, making allowance for each other’s faults because of your love.  Make every effort to keep yourselves united in the Spirit, binding yourselves together with peace” (Ephesians 4.2-3, NLT).

One of my favourite stories in the Bible is the story of Ananias and Sapphira in Acts 5. If you don’t know it, click the link and read it.

Did you read it? I know what you might be thinking. That’s twisted!

Do you think so? Let’s think about it for a minute.

One of the key characteristics of the early church is that it cared for people. Modelled after the Jewish community from which the church arose, the early church was committed to looking after the needy, and the overall work of making disciples. And that didn’t happen in a vacuum. It wasn’t “somebody else” who undertook this. There was no government safety net available from Rome. Followers of Jesus and they alone tended to the needs of the church.

Those who belonged to that early Christian community were committed to funding the mandate of the church. People were selling their goods, and pooling what they had in common. Ananias and Sapphira were among them.

This couple, though, conspired to hold back some of what they said they were giving to the Lord’s work. The problem was that they said it was the whole amount of the proceeds of the property they sold. But it wasn’t. They were lying.

Getting zapped – ‘falling to the floor and dying’ is the rather more dignified way that Luke, the writer of Acts, puts it – seems an extreme punishment for fibbing. But think of what was at stake there.

A tough question, but it needs to be asked: are you depriving others of their God-given needs because you are holding something back?

“Bring all the tithes into the storehouse so there will be enough food in my Temple. If you do,” says the Lord of Heaven’s Armies, “I will open the windows of heaven for you. I will pour out a blessing so great you won’t have enough room to take it in! Try it! Put me to the test!” (Malachi 3.10, NLT).