One of the challenges we face today, having so much information at our fingertips, is that important information often gets covered over by newer information. For example, when was the last time you heard something about the conflict in Syria? It’s still going on, but it doesn’t make the news – unless you go looking for it specifically.

Of course, some information gets sent to the bottom of the news pile for political reasons, too – sadly. There is one ongoing news story that isn’t getting much attention, for both of these reasons. It’s not new, and it’s not politically correct. It’s the terrible, tragic story of Christians who are being persecuted, extorted, exiled, or killed in northern Iraq, just for being Christians.

Pictured is the Arabic letter nun (the equivalent of our N). It is being spray-painted on the homes of Christians, standing for “Nazarene”. This labels the homes 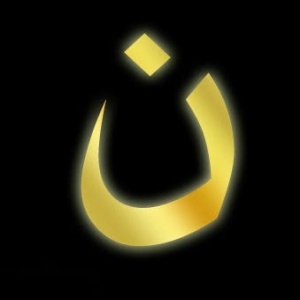 so that they are known as followers of Jesus, and can thereby be persecuted, extorted, exiled, or killed, just for being Christians.

Other than a few who make a point of keeping this in the public eye via social media, it’s not being reported on very widely. But as a follower of Jesus, you need to know about this, so you can, at the very least, pray for those Chaldean believers. There seems to be little the international community is willing to do to help these people, being so severely dealt with by their own countrymen, just for being Christians.

Suffering and persecution are not new to the Christian faith. The apostle Paul once wrote to the Romans, “since we are his children, we are his heirs. In fact, together with Christ we are heirs of God’s glory. But if we are to share his glory, we must also share his suffering” (Romans 8.17, NLT). So we can take heart that the faithful of Mosul, who are being persecuted, extorted, exiled or killed for their faith, are following in the way of Christ; perhaps, in certain moments, they do, too. But that cannot stop us from seeking the justice that these believers deserve.

What if we were in their shoes? What if it were us who were suffering for our faith? Few of us in the western world truly understand what that’s like. But if we live out our faith in its fullest sense, we will experience some degree of persecution. At the hands of the Islamists, Christians in Iraq are experiencing grave persecution, greater than anything we could imagine.

View all posts by Jeff